Why Skipping the Dentist is Bad for You

posted by Jenny Everett in SElf Magazine. 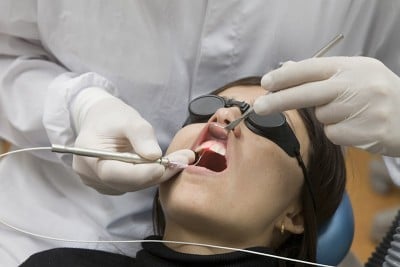 While we don’t love going to the dentist, we try to make ourselves do it twice a year. But for some reason, we’re more likely to blow off a tooth sprucing than any of our other health-related appointments. It just feels more “optional” than, say, a trip to the gym.

And we’re not alone in this: According to the Centers for Disease Control, 71.4 percent of women over age 18 had their teeth cleaned in 2008. That means more than a quarter of all women are skipping the dentist!

To find out exactly what health benefits we’re missing out on when we skip a cleaning — and for some motivation to set up an appointment — we spoke to Sally J. Cram, consumer adviser for the American Dental Association and a periodontist in Washington, DC.

“I have seen a significant number of patients who want to stretch cleanings to once a year rather than twice a year and put off X-rays due to the expense,” says Cram. “A lot of this has to do with the economy. At the same time, I think more people are starting to see the relationship between oral health and overall health.”

Here are some non-tooth-related health conditions that may be spotted or prevented by a dentist (or go undiagnosed if you skip an appointment).

1. Heart disease. A new study from researchers at Berkeley found that women who get dental care may reduce their risk of heart disease by one-third. “People who have chronic infection in their oral cavity are at higher risk for heart attack, strokes, coronary artery disease,” says Cram. “When you have an infection around your gums and teeth, that gets into your blood, thickens the vessels and narrows them. If you have a family history of heart disease, it’s very important to be vigilant about oral health.”

2. Oral Cancer. “Every time you have your teeth cleaned, they are doing a visual and manual inspection looking for swollen or red areas, ulcerated areas and anything that looks out of the ordinary,” says Cram. “Often times these oral cancers are asymptomatic and the dentist can bring it to your attention.” People who are especially high risk: Smokers (duh) and anyone who consumes more than one alcoholic beverage on a daily basis.

3, Nutritional deficiencies. By looking at your tongue and gums, your dentist may be able to tell if you are lacking in certain vitamins and nutrients. One thing they look for is pale tongue, which may indicate an iron deficiency, says Cram.

4. Diabetes. The condition of your teeth and gums may point to diabetes, says Cram, who has helped dozens of patients get diagnosed in her career. “There is a definite cause and effect between diabetes and oral health, and it goes both ways,” she says. “Diabetes reduces your body’s ability to fight infection-causing gum and teeth issues, and gum disease also makes it hard to control your diabetes.” If you have a family history of diabetes or are a diabetic, Cram suggests talking to your dentist, who may recommend that you have cleanings three or four times a year.

“The key thing to remember is that for most of the things that can go wrong with your mouth, it’s much less expensive to get regular cleanings than it is to get major procedures such as crowns and root canals later,” says Cram.

Contact Us Book Appointment
With the abundance of COVID-19 we have suspended elective procedures for two weeks, until April 6th. Please call our office as needed for EMERGENCY dental treatment only at (910) 692-4450 Ok